Old Fort Jackson: In Our Own Backyard

I seem to be in this Spring/Summer Exploration Mode, having recently enjoyed excursions to the Amelia Island History Museum, a great little southern vineyard, Tybee Island, a Georgia Southern University tour, and the Savannah Asian Festival, to name a few.  I know that this is common knowledge, but isn’t it weird that we often wish for trips to faraway places (Ireland, Ireland) when so very often we have unexplored treasures within our own towns and environs?

Yesterday morning, after sleeping far too late for a man my age (don’t ask), and after eating a great traditional breakfast that included the CREAMIEST grits ever at Sunny Side Up, I said to myself, “Neal, you don’t have any plans today (and, really, should you have worn pajamas to a restaurant? what are you, twelve?), so why not do something you normally don’t do?  What might make you happy today?”  I picked up my fourth piece of heavily buttered raisin toast.  “I know,” I answered, “I’ve never been to Old Fort Jackson, but I’ve seen the sign a hundred times going out to Tybee.”

Wiping butter, Paula-Deenishly, from my face, I gathered myselves together, took a vote, and decided, yes!, that would be the plan for the day–Old Fort Jackson.  So I dashed home, slathered sunscreen on top of the butter and headed south on President Street.  Driving along, I flipped on the radio and the following tune was playing, which immediately put me in the mood for such an adventure into history.  (Alright, maybe it wasn’t playing on the radio, but still.)  (To hear the song, scroll all the way down to the tiny audio clip, once you click on the icon below.)

After doing a little online research (does anyone darken the door of a library these days?), I discovered that Old Fort Jackson is Georgia’s oldest standing brick fort.  It rests proudly on the banks on the Savannah River about a mile south of the historic district (where I live) and is named for Revolutionary War soldier James Jackson who went on to become Georgia’s governor.  (I really, really want a fort or a mall or a new planet or a cookie or something to be named after me.)

… I glanced briefly at a cool display of books,

vowing to return later because I HAD to hurry into the fort for the 2:00 cannon firing demonstration.  Wait, back up!  I forgot to tell you that Brandon is a local high school social studies teacher, having taught at Savannah High and now the chair of the Social Studies Department at the newly built New Hampstead High School.  Go Brandon.  Bring history to life!

Carefully crossing the moat (any alligators today?), I paused at the entrance. 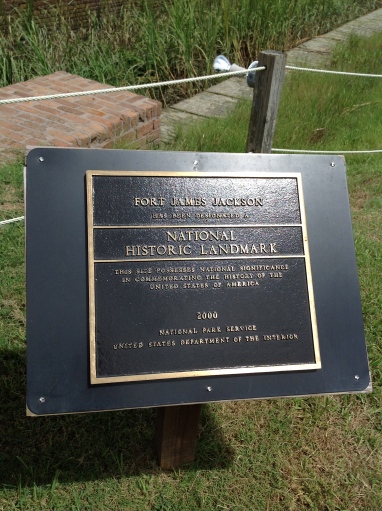 I made it to the demonstration area just in time and actually finagled a front-row seat.  But before I had time to ask if anyone else was nervous and shaking about a REAL cannon being fired at such close range, 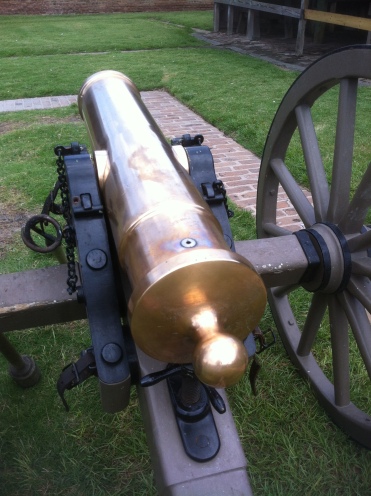 a Confederate-looking soldier came walking briskly toward us from the distance.  I strained in the July sun to get a better look at him.

Low and behold, he was a she!

She introduced herself as Corporal Jowers of the Confederate Army.  I learned SO much about Civil War weaponry from the corporal.  Do you know, for example, the definition of a “cannonball catcher”?  I’m so glad I didn’t volunteer an answer.  (Ever since I spelled “Georgia” as “Jeorgia” in a spelling bee final in junior high, I have been hesitant to answer ANY question whatsoever about any subject anywhere.)  Well, a cannonball catcher is an unfortunate soldier shot by a cannon!  Terms such as “grapeshot,” “smoothboard cannons,” “rifling in cannons” and “fused explosives” came to life in the corporal’s fascinating explanation.  Here’s a home video of part of her presentation.  It’s pretty long but chock full of interesting Civil War info.

Well, after nearly dropping a thirty-two pound cannonball on my sandaled left foot,

it was finally time for the firing of the cannon.

The firing was SO LOUD!  Like the Loudest Fireworks quadrupled.  Cpl Jowers TOLD US, WARNED US, BEGGED US to hold our hands against our ears very tightly when she gave the firing signal.  We even practiced the ear-covering maneuver as a group–such fun!  Sort of like an ice breaker, bonding activity.  But I guess I wasn’t listening extremely well when the firing signal actually came because a HUGE cargo ship was passing by just beyond the fort walls, and I was oohing and ahhing embarrassingly.  So in order to help you see the situation more clearly, I am (at much expense, effort and time) reenacting the event for you.  I mean, you are my Faithful Blog Followers and all.

Realistic Reenactment Picture One: What Cpl Jowers told us to do: 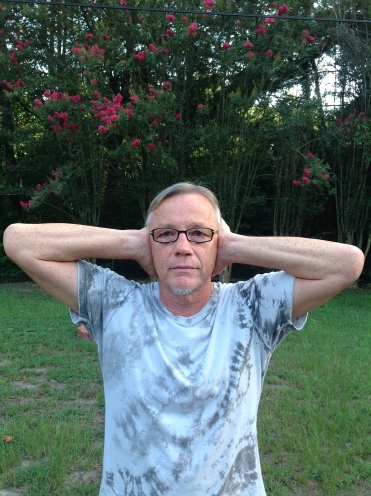 Realistic Reenactment Picture Two: What Neal did when attention was drawn to cargo ship:

[Warning: You can choose to believe or not believe the rest of the post.  My marbles may have become a bit loose from the cannon ball firing fiasco.]

The grounds, as well as the buildings of Old Fort Jackson are amazingly beautiful.  So after the firing, I stumbled around, a bit dazed, enjoying the sights–I think. 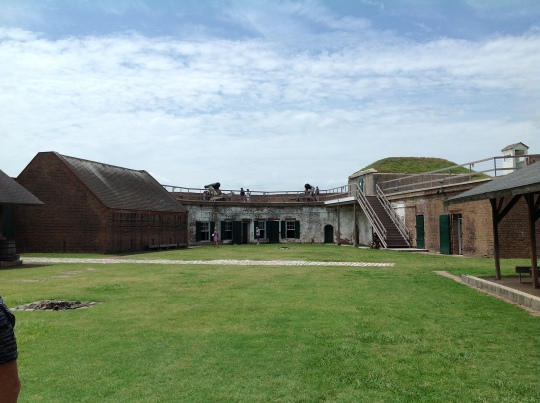 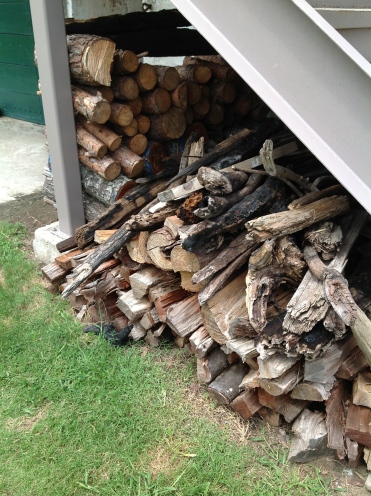 Needing a break from the heat, I ventured through these doors to explore some of the indoor displays. 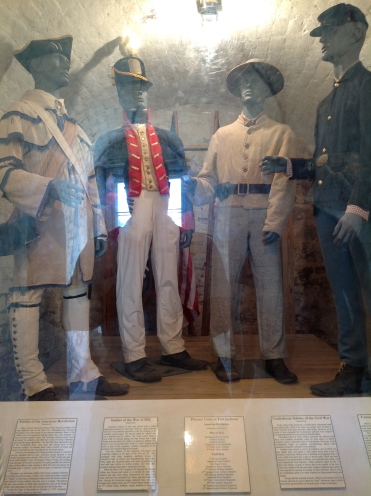 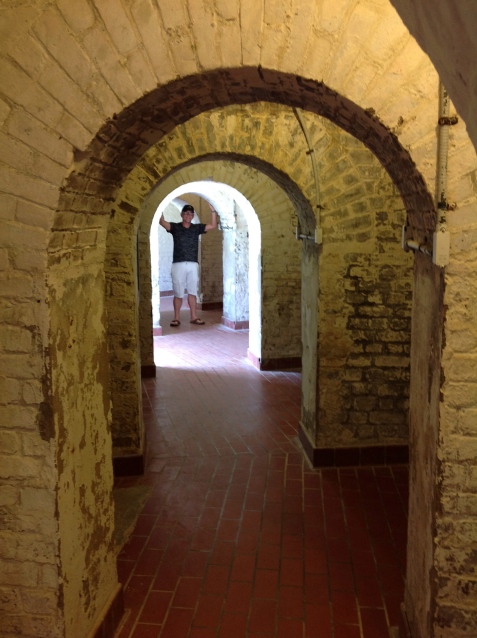 I’m not sure what possesses me to try to climb into every bed I see in a museum (note to self: yet another therapy talking point).

Rested, I turned a corner and thought I was back at the vineyard! 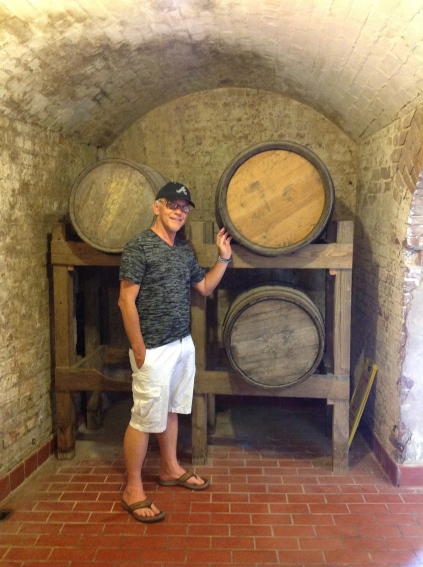 Had to be placed in Time Out only once.  (Kinda proud of that.)

Repentant and reflective, I marched on.

Voluntarily conducted a safety check of the cannons. 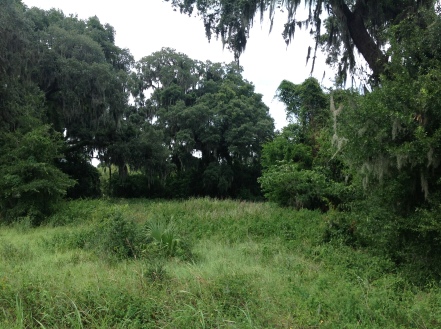 It finally approached the time to abandon the fort.

But before I left, I shamelessly gave Cpl Jowers a NealEnJoy blog bookmark, which she graciously accepted and displayed.

I also went back by the Tybee Depot, 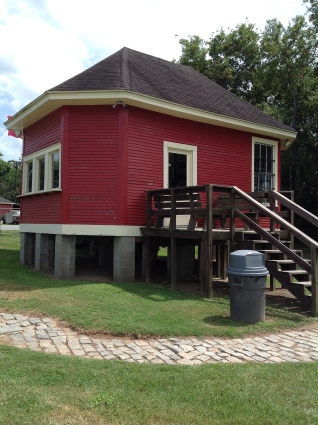 and played in the gift shop for a few minutes,

before giving Brandon a blog bookmark.

I met two lovely ladies visiting from the U.K., and we were happy to discover that we all three teach English!  So of course I gave them a bookmark, with promises to stay in touch across the pond.

In the parking lot, I also met talkative, friendly Steve from Florida.  He and his wife drove up for the day.  (Guess what I gave him?  Hint: look in his hand in second photo.)

What wonderful “In Our Own Backyard” fun!  I think I’ll start a new blog category called just that!  Where to next?

Morals of this story:

2.  It’s invigorating to go to a place where all the people there WANT to be there … and who are so INTO the goings-on (I love that word).  Those folks asked such great questions of Cpl Jowers.  As usual, I had trouble coming up with one intelligent-sounding question.  So I waited till after the cannon firing to ask mine:  “Don’t you get hot in that wool get-up?!”  Her reply: “Well, you get acclimated to it.”  The corporal knows Civil War weaponry AND life philosophy.

4.  You never know what new friends you might meet if you just say hello (and have a pocketful of blog cards).

In Our Own Backyard

Comments on: "Old Fort Jackson: In Our Own Backyard" (6)