I drove up to the small town of Ball Ground (just north of Atlanta) this morning to help celebrate the 89th Birthday of my father, Harold Hulon Saye Sr.

What a JOY both my parents are! They still make me laugh like nobody else can. 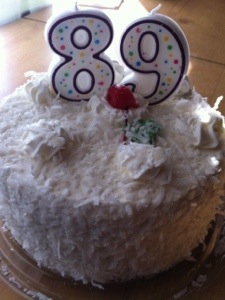 Minding my own business over the weekend, peacefully walking along the river in downtown Savannah, not at all trying to start something that would have to be finished, my joyfully calm day became something altogether darkly different when an overly confident Toy Soldier started to–.

Wait, let’s back up a second.  Some of you know that I occasionally find myself, through no fault of my own, smack dab in the middle of the most painfully demanding staring contests.  Renaissance men, famous football coaches, even Pirates all have been my adversaries in this universally accepted battle of true manhood and endurance.

Anyway, back to my story.  As I was trekking through the lobby of the Riverfront Marriott, hoping to find some free holiday punch and maybe a cookie to further cheer me, and thinking about the feasibility of writing a letter to Santa at my age (that confession might be borderline funny if it wasn’t so very true), I heard a Snicker, a Snigger, and felt inexplicably Scorned, Scoffed.  Initially thinking, Ebeneezer Scrooge-ishly, that the interruption might simply be the result of the fried duck and waffle breakfast I demolished earlier at B. Matthew’s on Bay Street, my sauntering slowed as I heard/felt the intrusion again.  So I turned casually around …

… only to see a Smirk, a Sneer on a colorful (I’ll give him that), sorta French-looking Toy Soldier.  I tried to be polite and friendly (afterall I write a happiness blog), but TS obviously had other plans, jerking his head one way, then the other in an only-partially-successful effort to intimidate me.

Finally after what felt like only minutes later, the feeble, old-enough-to-be-MY father concierge told me (rather rudely in my opinion), that I had to get out of his lap, and that no, his table was not big enough for both of us to sit behind.  So I marched right back over to the Toy Soldier (he was perched by the only exit), knowing a battle awaited.  Gathering my gumption, I flung myself headlong into Staring Contest #4. 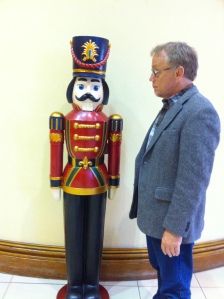 And as is usually the case, whenever I stop trembling, Neal’s courage arrives.  Holiday revelers gathered round, about half of them backing up TS, the others for yours truly.

Big deal that his fans were more festively dressed and enthusiastic than mine. 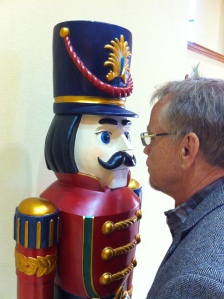 And even though I really had to use the bathroon after having sipped all the concierge’s cocoa, I held my own.  The game I’m talking about.

“Peace begins with a smile.”