I’m Having Twins! + The Naming Contest

I don’t mean me literally, of course.  Really, how gullible are you?  Actually I will be the grandfather of TWINS (!) sometime in August.  My younger daughter Emily gave us the exciting news a few weeks ago.  I simply didn’t believe her at first.  There are no twins in our family that I know of (although one time I saw a guy in Taos, NM, at a teacher’s conference who looked amazingly like me).

I still think of Em as the baby and the little girl who at one time had a collection of over 10,000 stickers (really) and who would count them regularly [truth!].  Hours of counting.  HOURS.  The name “Emily,” by the way, means “the diligent one.”  [“Neal” means “champion of the world.”  Just saying.]

Emily txted me and said it was okay to share the recent sonogram with you.  So here’s what the twins look like: 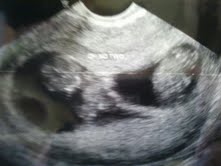 They are about an inch long here.  But what strikes me most is how intelligent they already look.

Em is working on names.  And I am trying to coerce/manipulate her into using names that I LIKE.  But the whole endeavor is getting muddled because

1)  Emily has always been strong-willed (her first words were “no way”) and for some reason SHE wants to name the babies, like I’m not a university professor and all.

2)  Then there’s the issue of whether the twins will be two girls, two boys or one of each (which in a way seems like a better deal).

3)  You have to decide if the names are going to rhyme (Roy/Coy) or not (Sylvia/Gertrude).  If I had a twin (and some folks believe we all have twins out there just waiting to be reunited with us–of course, most of those same people were simply devastated when Oprah ended), I would not want us to be named something so rhymingly predictable as Neal/Bill.  I would want his name to be cool and hip, maybe Creel or Steele.

If Emily’s twins are a boy and a girl, my first thoughts were Neal and Nealy.  But a problem with that is my first grandson Daniel (see “Introducing Mr. Happy” post) already has the middle name Neal.  Could I have two grandsons with the same name?  Maybe.  It’s 2012.  Two girls?  Nealy and Nell.  Two boys?  Neal and Niels.

I also like the name Thatcher for a boy.  (I actually do.)

I hearby open up a contest to help name the twins.  Like the HGTV Dream Home Contest, you can enter as many times as you like.  The prize will be really, really cool and very, very valuable.

Post your ideas!  We only have about eight more months.

“Everything I Touch”: An Affirmation