It’s Friday again!  And here are Five Things I am happy about:

1.  Realizing–as soon as I woke up this morning–that it was Friday again.  I love that feeling.  (I understand that “woke up” and “this morning” might seem redundant to some readers.  However, I’m a college professor.  Take a 3:00 afternoon class, for example.  That’s a bit of an early rise for some students (I wish I was kidding), so I’m always careful to add a time indicator after using the words “woke up.” 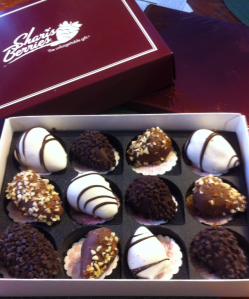 3.  Trying to understand why someone would ask for a to-go box for one piece of leftover bacon.  I ate breakfast at The Original Pancake House in Savannah the other day with some friends.  One of them demolished all his food (the silver dollar pancake meal) except for ONE piece of crisp bacon.  Are you with me?  The meal is over, right?  You get up and pay for your meal.  Head on out to the cattle-rustling.

But no, JoNathan, seeing our waitress with the curly letters tattooed on the underside of her wrist, asked for a to-go box.  She looked down at his place, confused for a second, until he pointed nonchalantly to the SINGLE piece of bacon–as if that was a normal request.  At that moment my eyes met hers, and we communicated via eye language (I’m multilingual):  “Is he KIDDING?  Why not just slip the bacon, unnoticed, in his shirt pocket?  And what type box would work?”  Well, she was a cool professional because she returned with a styrofoam hot dog container. 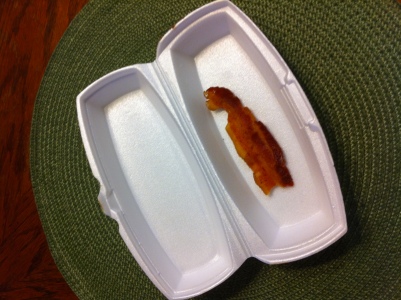 (I tipped her a little extra for her trouble, patience and understanding.)

And to sort of put Item 2 and Item 3 together, did you know you can get chocolate-covered bacon?

4.  Making the right decision about a lady in Walgreens today with toilet tissue hanging out of the back of her pants.  I was minding my own business, sitting in the little waiting area at the back of the drug store, biding time for a prescription to be filled, and reading my new Bloggers Boot Camp book.  (Did you know that with the right mix of “savvy, in-the-now hipness” and “cutting edge techno-go,” I MIGHT BECOME A MILLIONAIRE JUST BY BLOGGING!   But first, I need to find out what “techno-go” is.  Help!  And I guess strangers need to start sending me money.)

Two other people were nearby–a hefty woman about two feet from me, standing at the Inspiration Books display, holding a box of those purple Peeps and looking (I’m pretty certain) in the direction of a thin book on fasting; and a man sitting two plastic chairs down from me in Richard Simmons-ish shorts.  (Can you even buy those anymore?  And why?)  Well, out of the blue this late-fortyish lady with frosted hair, brand new-looking jeans and a black Northface rushed up to the Prescription Pick-Up counter and breathlessly asked if her medicine was ready.  It was (with an added grape flavor, I couldn’t help but overhear).  But wait just a second, let’s back up a bit–as she rushed forward, a couple feet of toilet paper (white, patterned) flew banner-like behind her, billowing somehow from the exact center of her waistband.

Should someone tell her about the toilet tissue?  If so, who?  I cast my initial vote for Ms. Peeps, but she appeared oblivious to the unfolding drama.  Richard Simmons?  Well, he did smirk just a little when he looked up from his Blackberry and saw Aurora and her trail.  Me?  No way.  I’m shy.  And get my feelings hurt far too easily.  Handle rejection catastrophically (with weeping and nail biting and lashing out at those closest to me).

Four people (five if you count the pimply but pleasant, teenage-looking pharmacist), thrown together by fate at Walgreens.  Not knowing what to do, I quickly txted several friends and family members:  “There’s a lady at Walgreens with toilet tissue hanging from back of pants!  Shud I tell her?”  All said YES!  Except for Riboclavin (See last Friday’s Five Happy Bringers post) who didn’t respond (until hours later).  It makes me SO mad when people do not drop whatever they’re doing and txt me back IMMEDIATELY.  It’s so rude of them.  (I wouldn’t care to bet money Riboclavin was taking his temperature or enjoying a stress-reducing bubble bath.)

To make sure I was doing the right thing, I did the WWJD strategy and decided Jesus would tell her; it’s compassion in action.  I would certainly want to know, wouldn’t you?  (One time–true story–I walked into a class and a courageous girl said, “Dr. Saye, there’s toilet paper attached to your shoe!”  Sure enough, there was.  Don’t ask me why.)

So as Aurora drifted away from the counter and headed toward sure humiliation, I intervened, feeling noble, like Braveheart, and said in a stage whisper, “Excuse me, ma’am, did you know that’s there’s some, uh, toilet paper kind of hooked onto you from behind?”  (I know, I know, it would be SO easy to deconstruct and critique my choice of words, but I was nervous.)  She laughed loudly and shrilly, like she had a nervous disorder, and yelled, “Oh my god, no!”  After she thanked me profusely, balled the tissue up and placed it in her purse, the incident ended.  I felt SO superior to Peeps and Richard.  And that made me happy.

5.  Taking this picture at Party City of a puppy heralding a celebration: 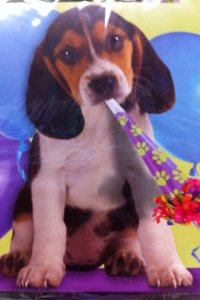 Well, hello! I've been waiting for you to show up. Neal Saye here.