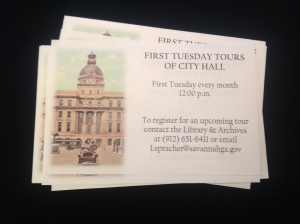 Every First Tuesday Savannah’s City Hall opens its doors for free tours.  I know, I know, touring City Hall doesn’t sound like the most exciting entertainment venue around.  But hold on just a second, compadre.  After a hefty helping of Gabriella’s Zesty Chicken (on mashed potatoes) at Zunzi’s, I wobbled down Bull Street, remembering just in time to look up before I reached the river, and saw this … 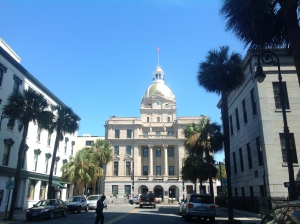 … City Hall features two figures who adorn the front, just below the clock and gold dome.  And those two pretty ladies represent Commerce and Art.  If you know anything about Savannah, you will find those figures so, so timely.  Because what was true in 1905 is certainly true today:  Savannah is both a big business city (Savannah Port and Gulfstream, for example) as well as a cultured, artistic town (SCAD, Savannah Music Festival, festivals galore).

The original clockwork is now in the lobby: 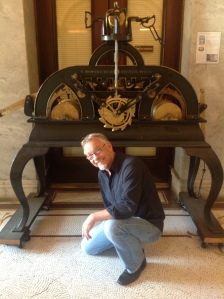 I really loved the wood floor.

Looking up to the interior stain glass dome: 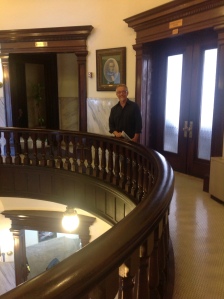 Some important Savannahian.  (I want a bust made of me.  Where can you go to get that done?  Hobby Lobby?  Michael’s?) 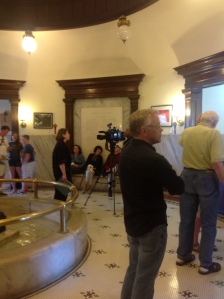 The plaque below looked historically official, so I stood there trying to read it to make people think I’m smart and all, but then I started daydreaming about the Vanilla Taffy down at River Street Sweets, so I took a picture of the plaque (which sorta still made me look smart because why else would you take a picture?).

Here I am with the really interesting tour guide (and SCAD grad), Luciana Spracher.  She knew her stuff! 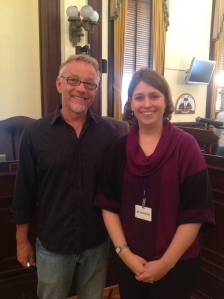 Did you know Savannah has a flag?

View from a back window of city hall: 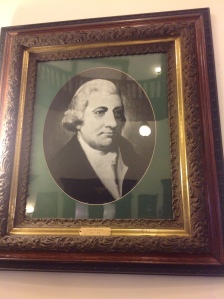 I pretended to know the mayor.  But you can only stand in front of her office for so long before people start to wonder what you’re doing.

TANGENT:  A couple of months ago, I attended an event at the Savannah Civic Center with our mayor, Edna Jackson. 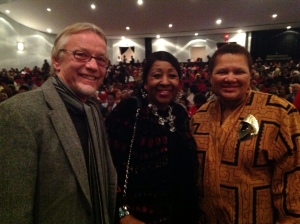 Okay, okay, maybe I wasn’t exactly with the mayor, but you can’t tell that from the above photo with her and Savannah State’s President, Dr. Cheryl Davenport Dozier.

Luciana led us into the Savannah City Council chambers.  For some reason I just got so excited. 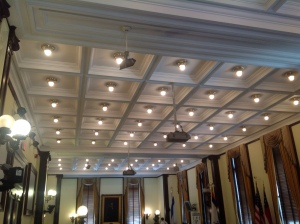 Here I am sitting at the mayor’s desk.  (Does she know people do this?)

What a fun (and educational) tour!  Thanks, Luciana.

In Our Own Backyard

What Are You Thankful For?