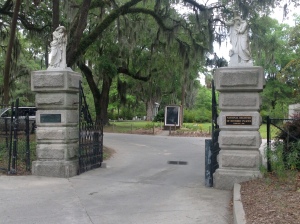 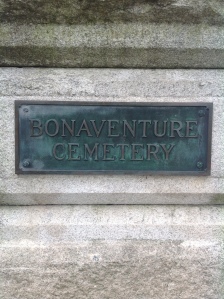 I spent an incredibly warm but wonderfully interesting couple of hours this afternoon at the historically magnificent Bonaventure Cemetery here in my beautiful Savannah.  The day might have been heavy and muggy, but my time there was anything but–cooler than Leopold’s!  It seems that every second Sunday the Bonaventure Historical Society offers free guided tours of the cemetery, so I showed up thirty minutes early with a big water bottle and wearing my thinnest t-shirt.

Before leaving my air conditioning, I checked out the cemetery’s website and learned that …

Though not Savannah’s oldest cemetery, Bonaventure is certainly its most famous and hauntingly beautiful. Quintessentially Southern Gothic, it has captured the imaginations of writers, poets, naturalists, photographers and filmmakers for more than 150 years. Part natural cathedral, part sculptural garden, Bonaventure transcends time.

Military generals, poet Conrad Aiken, Academy Award-winning lyricist Johnny Mercer and Georgia’s first governor Edward Telfair are among those buried at Bonaventure. The approximately 100-acre cemetery is also historically significant as a reflection of changing views on death and dying in the Victorian era. As death became more romanticized and ritualized during this period, cemeteries became lush, beautiful “cities of the dead.”

Another reason behind Bonaventure’s popularity is John Berendt’s book, Midnight in the Garden of Good and Evil, which featured a cover photo of the now-famous “Bird Girl” statue, formerly located in Bonaventure. The statue has since been moved to the Telfair Museum of Art, founded through the bequest of Mary Telfair, also buried at Bonaventure. 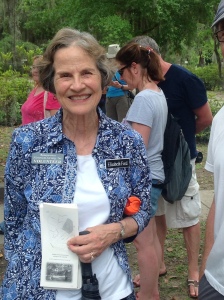 … oozed Southern hospitality and a spoke a delicious Southern dialect.  (After the tour, I wanted to go home with her just to hear her talk some more. But I didn’t really know how to ask.)

Elizabeth led us around the hauntingly beautiful Gothic graveyard, along the banks of the lazy Wilmington River, regaling us with stories of the history of the place and showing us gravesites of some of the more prominent folks buried there.  But what I loved most of all was the simple interplay of a deeply Southern voice leading me, slowly, on Sunday afternoon time, through such beauty. 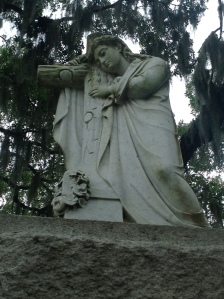 (In the above pic, I was aiming for a cemetery facial expression.  Did I get anywhere close?) 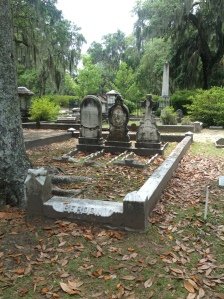 (I wish I had a ponytail like that guy to my left.) 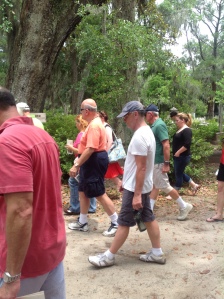 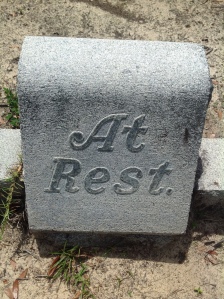 My parents taught me to love cemeteries.  As friendly places, reservoirs of wonderful memories.  To this day, when I return home to visit them, we usually end up at one of several cemeteries in or around my hometown of Ball Ground, Georgia, where close relatives are buried.  Granny Nix and Veto.  Mama and Papa Saye.  My brother Jimmy who lived only one week.  Old Doc Saye, Ball Ground’s first doctor.    Pulling weeds around a headstone, or straightening flower arrangements, we get caught up in “Remember when’s” and “She was a pistol!” and “I still miss him so much.”  They taught me that I am standing tall today because of all of them who came before.

Bonaventure: an afternoon of warm joy.

22 thoughts on “Sunday Afternoon Adventure at Bonaventure: A PhotoJournal”

Well, hello! I've been waiting for you to show up. Neal Saye here.