Some of My Favorite Trees — Updated

I love trees, always have.

I think that I shall never see
A poem lovely as a tree.

A tree whose hungry mouth is prest
Against the sweet earth’s flowing breast;

A tree that looks at God all day,
And lifts her leafy arms to pray;

A tree that may in summer wear
A nest of robins in her hair;

Upon whose bosom snow has lain;
Who intimately lives with rain.

Poems are made by fools like me,
But only God can make a tree.

I’m going to share with you some of my favorite Savannah-area trees.  (I realize that March is probably not the best time to be taking pics of trees.)

1.  The I’m Still Standing Tree.  This is probably my very favorite tree around. 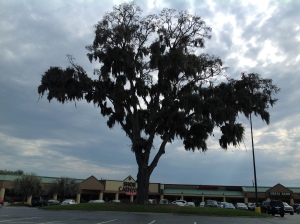 It’s not the most beautiful by any stretch.  It’s not shaped evenly, and it’s not full–there are large openings in the branch coverage.  So why is it my favorite?  Simple.  It’s still standing.  If you take a closer look at the views below, you will notice that the IST tree is still standing in the middle of the paved parking lot at Savannah Centre at the corner of Stephenson and Hodgson-Memorial.  And it’s the only tree around.  It exudes courage, independence, feistyness.  It beat the odds.  It simply IS.  I want its is-ness and its determination. 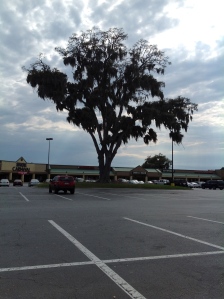 2.  The You’re-Right-Outside-My-Office-Window-and-I’ve-Watched-You-Grow-from-a-Seedling Tree.  You know how sometimes you’re buddies with a person due to geography, because she or he is just THERE,  like Kramer was to Jerry on Seinfeld?  Well, that’s how the tree below and I developed our relationship.  I might not have necessarily chosen it as an in-your-face friend but am now so glad we were put together. 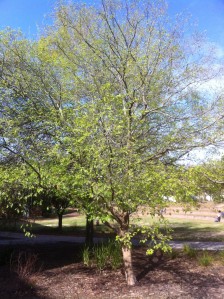 3.  The Fake-It Tree.  I like this fake bonsai tree which sits on my desk at work.  A student used it in a class project several years ago, didn’t want it, and I adopted it.  Most folks ooh and aah when they first see it; they think it’s real.  Bonsy has taught me that if you aren’t, act like you are anyway, and most people won’t know the difference.

5.  I saw the coolest and tallest Christmas Tree last Christmas in Charleston.  You could walk right inside it!  It told me that I could be a bit more open to people. 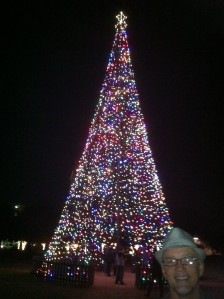 6.  And this Lighted Palm Tree (who lights palms?), must have been talking about me with the Christmas tree above because Palmy told me that it’s okay to show off and show out from time to time-and be seen.

7.  And finally The Candler Oak near Forsyth Park in Savannah.  It demands respect due to its age, its continued growth. 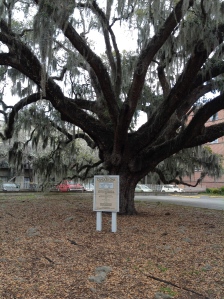 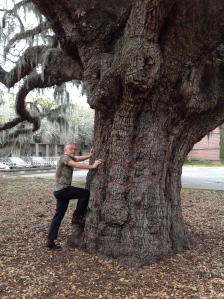 The Measure of Success

Comments on: "Some of My Favorite Trees — Updated" (2)